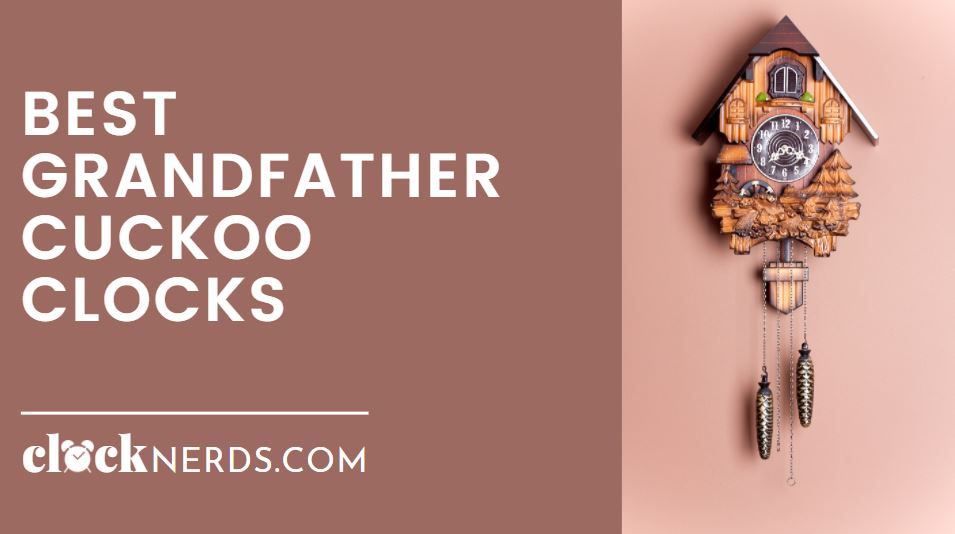 If you love clocks, then you know that they come in a range of styles. There’s a type of clock to go with every kind of decoration style, whether you like modern styles or more old-fashioned ones like art deco.

Easily two of the most unique-looking clock types are grandfather clocks and cuckoo clocks. Did you know that some clocks even combine these types? 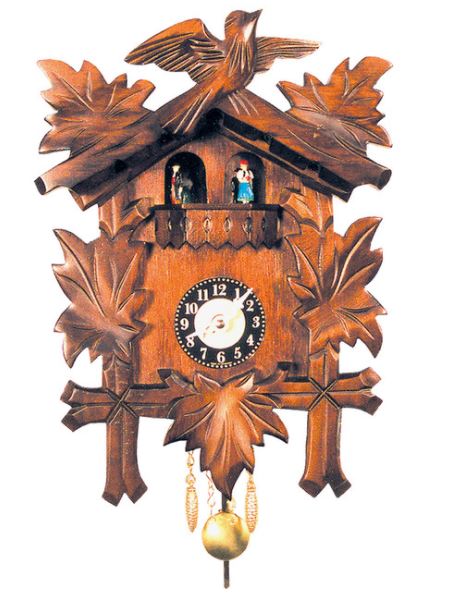 Many cuckoo clocks follow a common theme that portrays cozy houses, forests, or other scenes in nature. We chose the Engstler Battery-Operated Clock as the first item on our list because, like a traditional grandfather clock, it has a wooden design, metallic weight shells, and a pendulum.

Another common trait this clock shares with many grandfather clocks is that it’s German-made. German-made components are high in quality, which is why they’re the gold standard in timepieces like this one.

Some grandfather clocks have an incredibly minimalist and simple appearance. That type of design makes it easier to match the clock in question with other decorative pieces you may have in your home.

If you’re looking for a cuckoo clock like that which still has a touch of luxury, consider this 24k 2195 Gold Wall Clock. As the name implies, the clock is made from metal sheet with real 24K gold.

Beneath the clock, there are also two elegant weight shells, much like you’d find in a large grandfather clock. As an added bonus, the clock has a built-in light sensor that will cause it to stop chiming after dark. 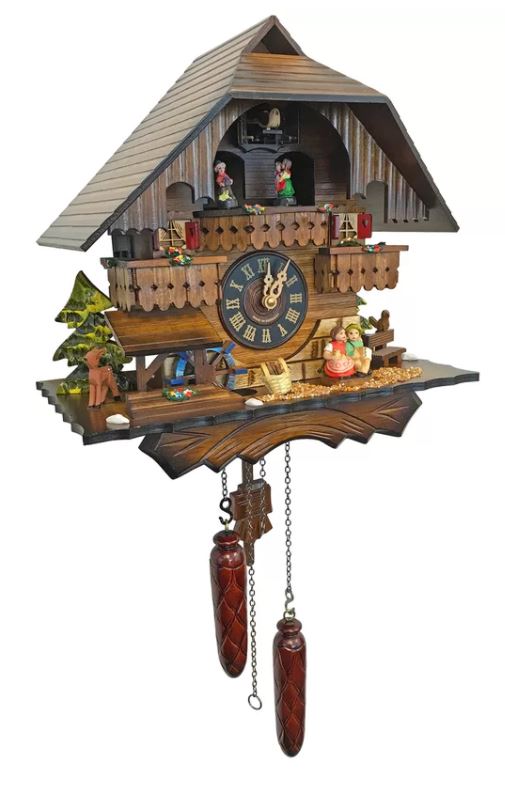 This Alexander Taron Battery Cuckoo Clock has an extremely traditional look as far as cuckoo clocks go. It also has the weight shells, pendulum, and solid wood design that are often incorporated into the features of a grandfather clock.

We just love the pops of color all over the face of this clock. Spinning dancers, a painted mill, and a tree all come together to make the clock into a colorful piece that functions as both art and a timekeeper.

You won’t get bored of the way this clock sounds, either. Rather than playing the same melody constantly, it cycles through twelve different melodies, so it sounds anything but uninteresting. 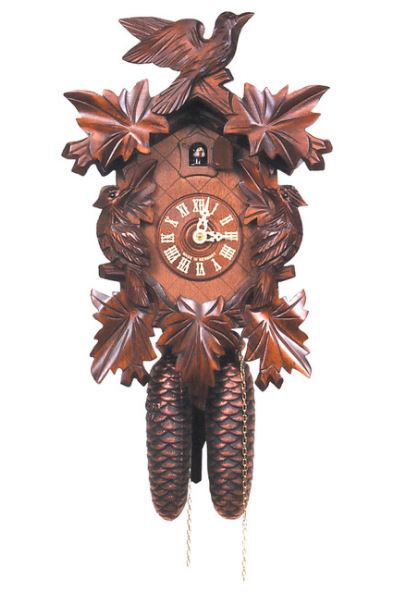 There are quite a few grandfather clocks with similarly ornate carvings and a dark, warm wood finish like this Engstler Carved Cuckoo Clock. That’s why we’re choosing to include this one on the list.

Twice per hour, this beautiful Engstler clock will play its chimes for you. It chimes every half hour, and then it gongs the number of the hour at the top of the hour – much like a traditional grandfather clock.

Additionally, it’s weight-driven. This does mean you’ll have to turn its crank every several days, but this is also another common feature in grandfather clocks. 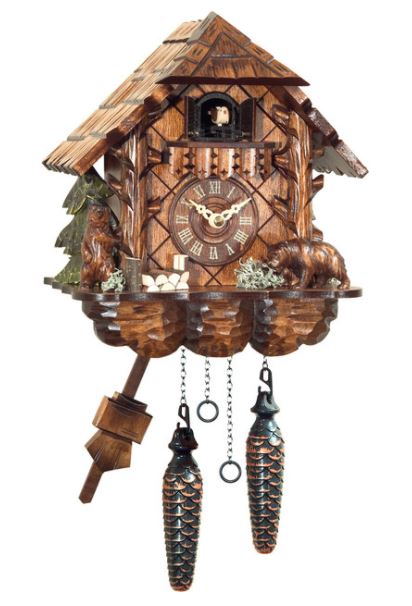 Looking for something a little different from the stereotypical homes and birds themes you see with cuckoo clocks? Check out this Engstler Carved Bears clock.

As you’d guess from the name, this clock features bears instead of dancers or bird carvings. There still is, of course, a cuckoo bird, but that’s not necessarily the focus of this rustic timepiece.

We’d recommend this one for any cabin or home striving for a country look. It’s undeniably woodsy and will make you think of a day out on the trails. 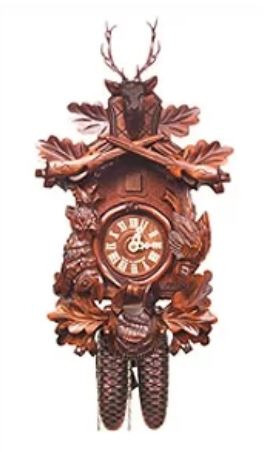 This Black Forest Cuckoo Wall Clock has an air of mystery that we couldn’t help but mention. Aside from its almost dark aesthetic, it’s regal, elegant, and ideal for tying together a rustic-style room.

The whole clock is carved out of wood. This is common for grandfather clocks, which are oftentimes also made mostly from wood.

What’s more, it’s weight-driven. While this does mean you’ll need to maintain it every eight days, it won’t take much of your time, and the look of the clock is honestly worth the maintenance. 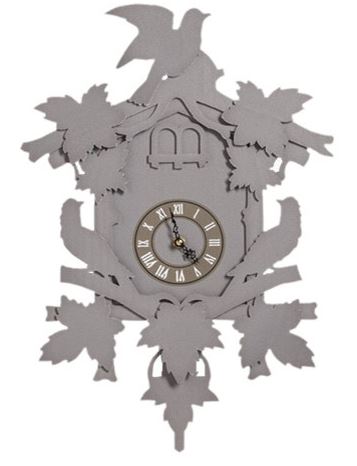 Are you looking for a cuckoo clock that will remind you of a grandfather clock, but have a small budget? In that case, this FunDeco Cuckoo Clock may be a good choice for your home.

Because it’s battery-powered and made from paperboard instead of being pure wood, it’s available for a much more modest price.

Furthermore, the clock comes in a few different colors and two sizes. You’ll have more flexibility to choose one that’s a perfect fit both visually and physically for your walls.

Best of all, there’s no assembly here. All you need to do is add a single AA battery to the clock, and it’s ready to hang up. 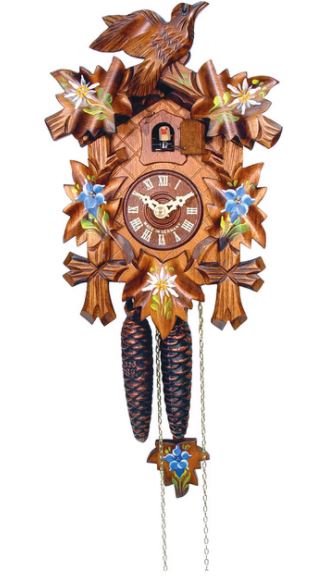 There are similar bird-themed clock designs to this one on the list already. What we liked about the Edelweiss Engstler Weight-Driven Cuckoo Clock, though, is the extra burst of color it has. In addition to the wood material, the clock has bright, fun paintings of flowers on the sides.

Aside from the extra coloration, you’ll get the standard features of a cuckoo-style clock. It’s weight-driven, which is a classic mechanical construction. The drawback is that it’s a one-day weight-driven clock, so you will need to wind it up more often.

However, for your efforts, you’ll be rewarded with enticing chimes on the hour and every half an hour. 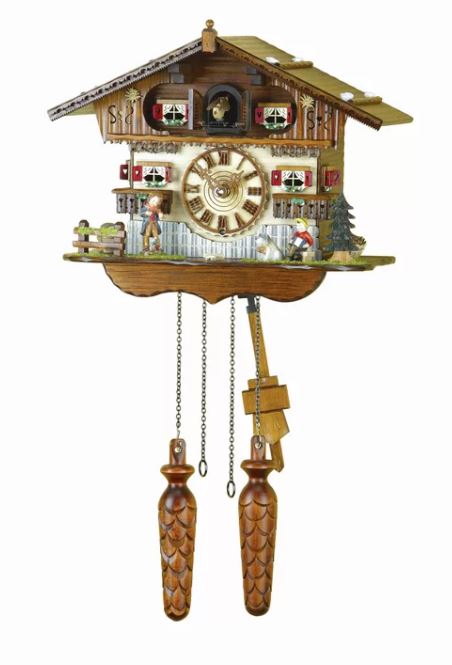 The Darby Home Co Walnut Wood Wall Clock is another bright, fun clock that you’ll love to look at. It has an almost holiday-inspired color scheme that will brighten up your home with holiday cheer during the most wonderful time of the year.

It’s also a battery-powered clock. That means you’ll never need to worry about remembering to wind it. All you need to do is add batteries that you’ll have to change every so often. 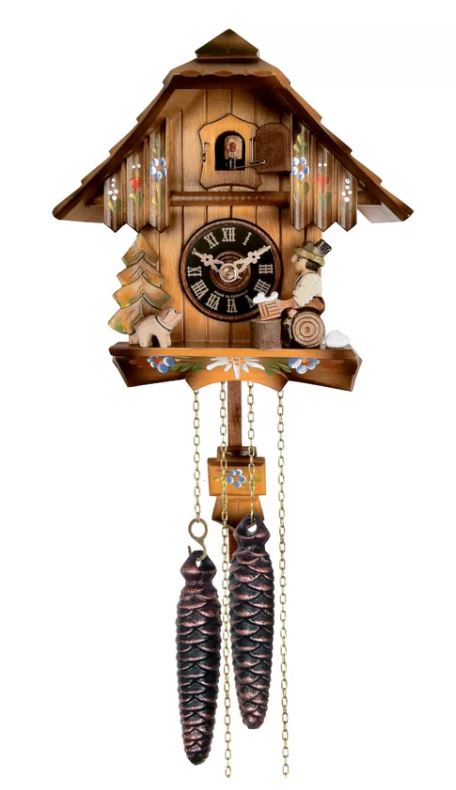 We believe in finishing strong, so we’ve included this River City Clocks Cuckoo Wall Clock in the final spot on our list. What makes this one unique is that it doesn’t have dancers or birds like a majority of the other clocks do. Instead, it has a man sitting in the front and drinking from his beer mug periodically.

It’s a fun and relatable clock that will bring a smile to your face. It doesn’t hurt that there’s also an adorable little dog off to the side of the dial.

As far as its operation goes, this is a weight-driven clock. It will need to be wound up once per day.

What to Consider When Buying a Grandfather Cuckoo Clock

The chiming of cuckoo and grandfather clocks is part of their charm. There’s something homey about the musical chiming of a clock drifting down the halls of your home periodically.

Of course, this doesn’t mean that you’ll want to hear the clock all the time. If you’re napping or sleeping late at night, you don’t want your clock to wake you up every hour with a loud chime.

That’s why we recommend confirming if the clock has a nighttime shutoff function. Many clocks even have an automatic one with a light sensor that will sense when it’s dark out, so it knows when to mute the chimes on its own.

You should also think about how the clock is operated. As far as cuckoo-style clocks go, they’re generally operated by batteries or mechanical cables.

There are benefits to either design. Battery-operated clocks have extraordinarily little maintenance. They simply require you to swap out the batteries every so often.

Mechanical clocks are classic, traditional pieces. We’d say these clocks have a much more authentic feel to them, and they don’t require you to have a stock of batteries on hand. The drawback, however, is that you will need to wind them every so often.

Many people choose a grandfather or cuckoo clock because of how they look. They obviously can be used to keep track of the time like any other clock can, but they also generally have very distinct appearances.

You would not be out of line for stopping to think about what kind of look you want your clock to have. Think about the material, the color, and what kind of accents you’d like.

There are many stunning cuckoo clocks out there that borrow elements from grandfather clocks. As you may have noticed, though, they commonly follow a chalet-style them that features a small log cabin-like home with people or animals around it.

In our opinion, one of the clocks that displays this theme best is the Alexander Taron Battery Cuckoo Clock. It has an extremely detailed design, spinning dancers, weight shells, a swinging pendulum, and the traditional bird that pops out every hour.